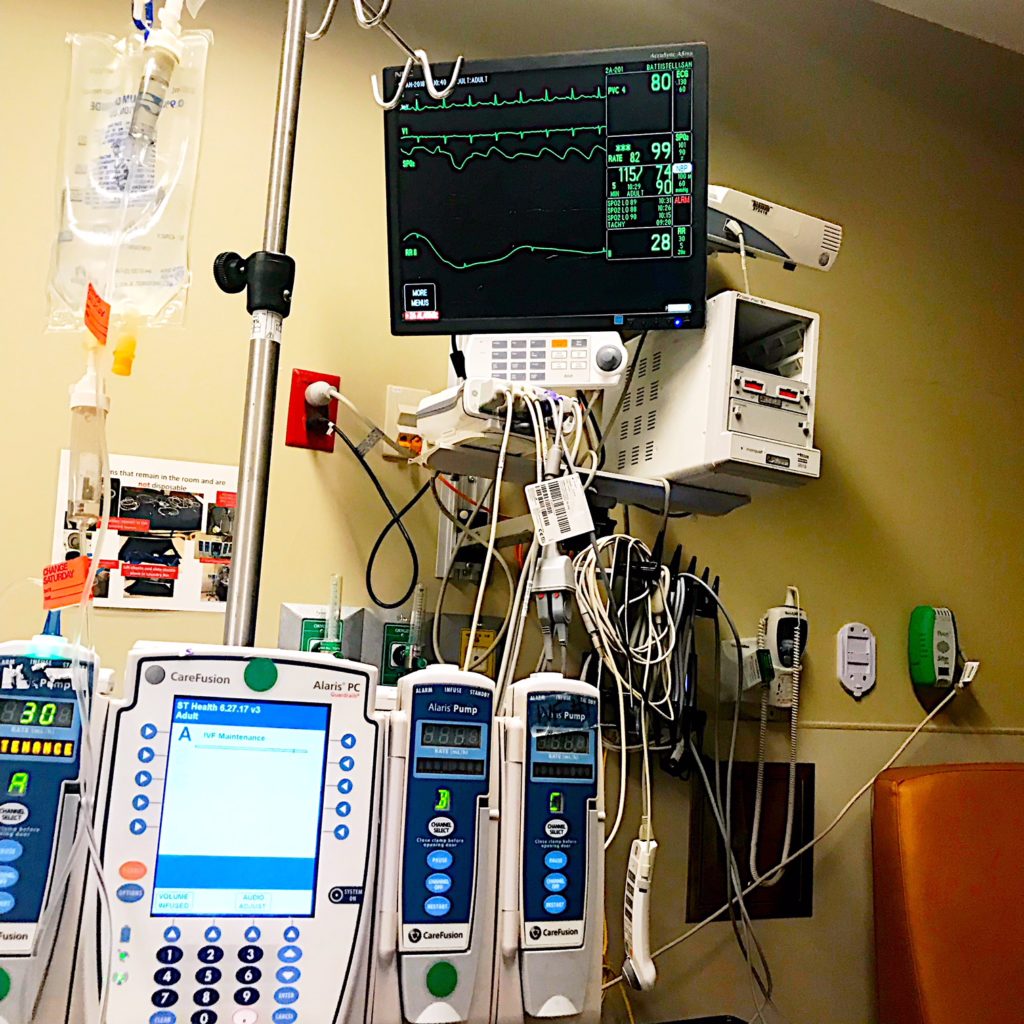 What mountain are you dealing with right now? A mountain that simply won’t move no matter what you do? A mountain causing you to doubt His grace is real? There’s a good reason for your mountain, I promise. Here’s the story of my latest, largest mountain and some principles that are helping me deal with it.

It’s no joke to bite your tongue. Trust me.  It’s only the last week of February but so much has already happened in 2018! It all began January 9th. After going to bed and sleeping soundly for several hours, a  massive seizure hit me out of the blue at 4:30 in the morning. My breathing was so heavy it woke my poor husband Mike up from a deep sleep! My jaw was clenched tight and I was sucking in air while biting my tongue so hard I caused it to bleed.

He couldn’t awaken me or get any response at all so, completely terrified and having no idea what on earth was happening, he called 911 and within minutes the ambulance and fire truck roared up to our front door. I remained unresponsive and no one knew if I was having a stroke, a heart attack or what.

I finally awoke as I was being put on a gurney, thoroughly confused. Who were these strangers in my bedroom? They placed me in the ambulance and Mike did his best to explain to me what had happened. My calves ached like crazy and my shoulders were throbbing as well. The EMT’s told me that with a seizure, your muscles tense up so much it’s just as if you’d run a marathon. 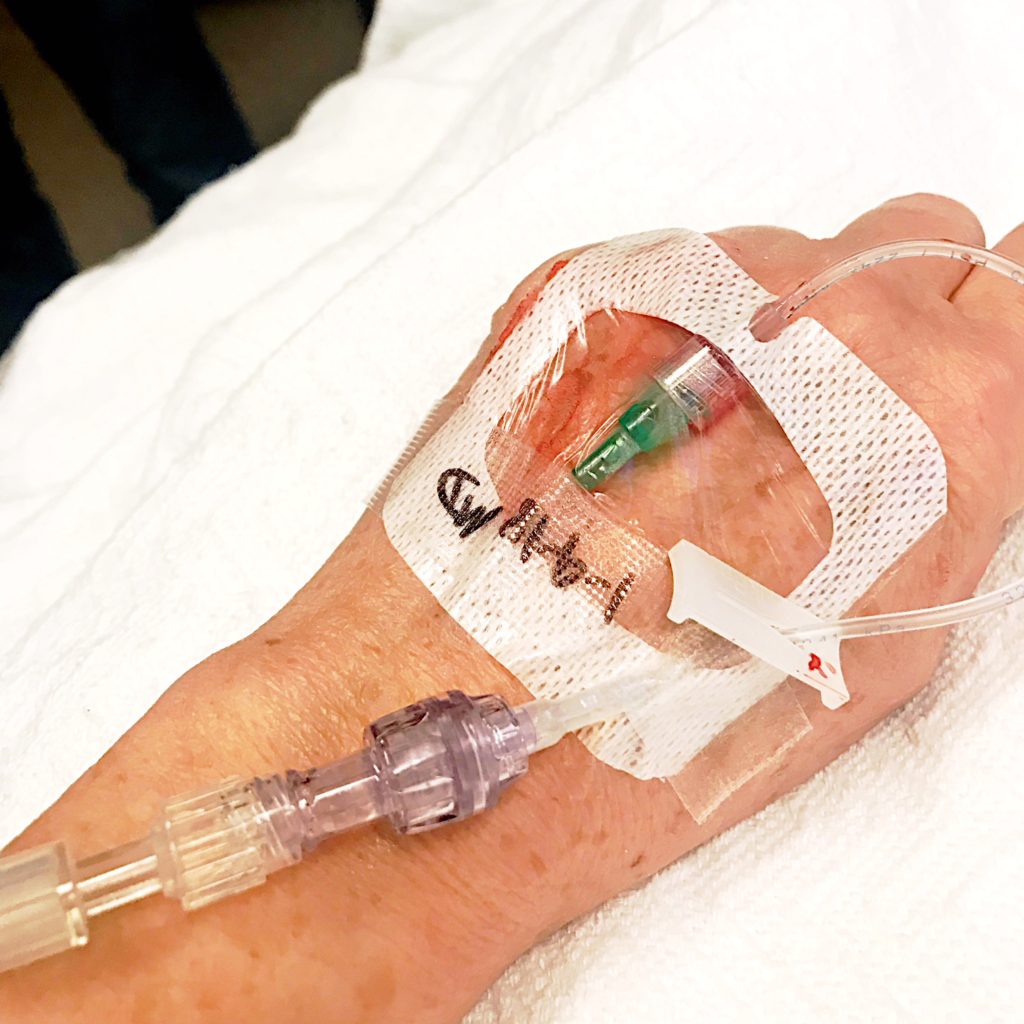 I stayed in the hospital all that day and evening and went home the next day. My shoulders continued aching unabated and my tongue was super tender where I’d bitten it but other than that, I was okay. The neurologist put me on the anti-seizure medication Keppra and told me I couldn’t drive for six months or swim or take a bath alone. Seizures on their own aren’t particularly dangerous…it’s what you’re doing when you have one that causes concern and urges caution with certain activities.

Three weeks later I went back to the neurologist for an EEG, a brain scan, which came out completely clear. The neurologist was utterly stumped as to what might have caused the seizure and since they couldn’t pick up anything abnormal in my brain, he took me off the meds. This was on a Wednesday.

So I came off the Keppra. Two nights later, our daughter Francesca was doing a guest appearance at Nashville’s WinterJam, the big arena show with ten Christian bands that tours the U.S. every year. Of course we went and of course, being a huge arena show, there were lots of bright lights, strobes and lasers, and though I tried not to look (strobe lights can trigger seizures) I still saw some of them.

We went home that night and went to bed but within 45 minutes, I began having another less severe seizure in my sleep and two more after that. Mike held me during them, praying the whole time, but I was asleep and unaware and didn’t realize till I woke up in the morning and he informed me I’d had three more in the night. What in the world?

I bit my tongue again, although not as badly as the first time, and my shoulders ached more than ever. They still ache and it’s hard to lift my hands over my head which is completely frustrating. Now, get this, months earlier, we’d bought tickets to see the touring production of The King and I at the performing arts center in Nashville and, even in spite of the events of the night before, we still went. Because of my history with that show, ( I starred in the National Tour with Yul Brynner for three years back in the early 80’s) there was no way I would miss it and I’m so glad we went. It was a wonderful production (and a welcome distraction from the events of the previous evening)!

So for now, I’m back on the anti-seizure meds, not driving till July but praying and believing for complete healing. I haven’t had anything happen in more than three weeks and I’m trusting the Lord that I won’t have any more episodes.

All this has made me realize, sometimes God allows mountains in our lives for a reason.

And as I’ve written about before, sometimes God allows in His wisdom what He could prevent with his power.

For all of 2016 and 2017 I battled a huge mountain of fear and anxiety. You can read about it here.  It took everything in me to battle it and it’s still not gone 100% but it’s so much better. God’s sustaining grace is getting me through.

Do you have a mountain that won’t move? I believe there are times God allows a mountain in our lives to prove to others that it CAN be moved. Not necessarily in our perfect timing but in His. And sometimes, He wants others to see His sustaining grace in our lives as we walk a difficult path. I have a couple of mountains that aren’t moving as fast as I’d like but I’m learning to cope with them and I continue to pray and believe.

To speak to the mountain and tell it to move.

Jesus said I only need faith as small as a mustard seed and honestly, that’s what it feels like most days but I continue to “walk and not faint.”  Isaiah 40:31

Matthew 17:20 says, “So Jesus said to them, “Because of your unbelief; for assuredly, I say to you, if you have faith as a mustard seed, you will say to this mountain, ‘Move from here to there,’ and it will move; and nothing will be impossible for you.”

Jesus said the mountain will move, He just doesn’t say when.

Maybe He wants to teach us to persevere. To show us there’s power when we “…call those things that are not as though they are.”  Romans 4:17. Now I’m not advocating wishful thinking, no. But I believe 100% in the power of our words. After all, God created the universe with a word. “In the beginning, God said let there be light and there was light…”  Genesis 1:1  In Proverbs 18:21, He reminds me that, “Death and life are in the power of the tongue and those who love it will eat it’s fruit.” Our words matter and our words can and do change the world.

It takes faith to see God’s promises come to pass, not wishful thinking. I believe 100% in divine healing because I’ve seen it in my own life. I’ll continue to pray for my mountain to move and I fully believe one day it will. But even if it doesn’t, you know what? God is still good. All the time. I have to trust He knows what I need better than I do. I will let this mountain mature me, teach me, draw me closer to the God who loves me and knows me better than I know myself.

Sometimes His grace is amazing, sometimes it delivers us from our problems and sometimes, it sustains us through them.

One thing I know for sure: there is no testimony without a test.

What about you? What’s your mountain? It would be my honor to pray for you!

20 Year End Things to Think About
Next Post: Living in the Extraordinary Ordinary »